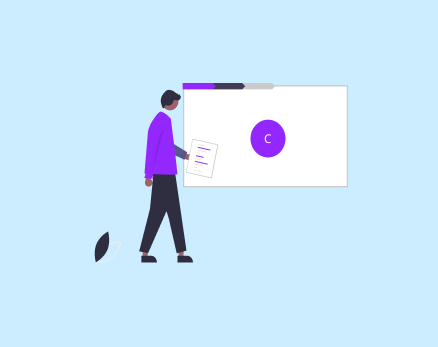 C programming is a popular and widely used programming language that has been around for decades. It is known for its efficiency, flexibility, and portability, making it a terrific choice for many developers.

C has historically been used to develop operating systems such as Unix, database software, compilers, and utility software.

The C programming language was developed in the 1970s by Dennis Ritchie at Bell Labs. C's syntax is based on  B, another language developed at Bell labs in the 1960s.

C was designed to write system-level software, including operating systems. The language became popular quickly as programmers began adopting it because of its efficiency, flexibility, and portability.

The first significant use of the C language was to develop the Unix operating system. Today, almost all popular operating systems, such as Microsoft Windows, Linux, and even macOS, are based on Unix.

In addition, C has been widely used to develop software such as compilers, text editors, database systems, and more.

As C is very efficient, hardware programmers use it to code firmware for embedded systems. Over the years, C has maintained its popularity and is still considered one of the essential programming languages in the world.

Many other programming languages, such as Python and C++, are C-based.

What is C Used For?

Let us now explore these application areas in detail.

Programmers can use C to build database management systems, which are software to organize, store, retrieve and manipulate data.

Veteran programmers also build database engines with C, which is quite efficient and provides better performance.

Sometimes, programmers use C to write database applications like a Database Administration tool or a database-backed web application.

These applications can use many database libraries and interfaces to interact with a DBMS and perform tasks like querying and updating records.

A compiler is a program that translates source code written in a programming language into machine code that can be executed by a computer.

Compiler development can be a complex and time-consuming process, and C is well-suited to handle it. With C, we can write compilers with features such as lexical analysis, parsing, and code generation.

Programmers use C to write support libraries or utilities for compilers. These libraries provide functions for tasks such as error handling, memory management, and code optimization.

C helps us build command-line tools or graphical user interfaces that allow users to interact with the compiler.

An operating system is a software program that acts as a bridge between the hardware and software of a computer.

We need an OS to handle a computer's basic functions, such as scheduling tasks, managing resources like RAM and CPU, controlling input/output devices, and more.

While C is not necessarily the go-to language for GUI software, you can still build decent GUIs with it.

C does not have built-in support for features such as widgets, buttons, and other GUI elements, and it requires a lot of low-level coding to implement these features.

But thankfully, there are third-party libraries and frameworks to provide support for GUI development in C.

A few of these libraries are GTK+, Qt, and wxWidgets. You can use these to provide a set of functions and tools we can use to create graphical user interfaces using C.

C does not have built-in support for animation and gaming. It lacks features such as 3D graphics, audio, and other multimedia elements, requiring low-level coding to implement these features.

But despite these limitations, C can still be used in game and animation development thanks to third-party libraries such as OpenGL, SDL, and SFML.

These libraries provide a set of functions and tools that can be used to create graphics, audio, and other multimedia elements using C.

On the other hand, C++ is used extensively in developing game engines, and most of the credit goes to C, as C++ is based on the C programming language.

Embedded systems are typically small, low-power devices that are designed to perform a specific task, such as controlling a motor or monitoring a sensor.

These systems often have limited memory and processing power. So, C is a good choice for programming them because it allows developers to write efficient code to effectively use the resources.

One of the key features of C that makes it well-suited for use in embedded systems is its support for a wide range of data types and control structures.

C allows developers to create programs that can perform various tasks, such as reading and writing to memory, interacting with hardware devices, and controlling the flow of data.

In addition, C programs can run on various platforms and devices, making it easy to write code for multiple types of embedded systems, which is necessary for developing complex systems.

Programmers use C to write parts of browsers that need low-level system access and performance optimization.

For instance, every browser has a rendering engine responsible for displaying web pages on the user screen. We can use C or C++ to write these engines so the websites load faster.

In addition to browser engines, C is also used for writing plugins and extensions for web browsers.

1. Where is C language used in real life?

C is a widely used programming language that you can find in various real-life applications:

Embedded systems: C is often used to program small, low-power devices that are designed to perform specific tasks, such as controlling a motor or monitoring a sensor.

Applications: Many applications, such as word processors, web browsers, and media players, are written in C for its performance and flexibility.

C and C++ are both useful programming languages.

C is a relatively simple, low-level language that is well-suited for tasks that require close interaction with hardware or low-level system functions.

C++ is an extension of C that adds additional features, such as object-oriented programming and templates, which make it more powerful and flexible.

Your project needs will determine the best language for you. C might be the better choice if you need a language that is simple, efficient, and easy to learn.

But if you need a language that is more powerful and flexible, with features like object-oriented programming and templates, C++ might be a better choice.

3. Should I learn C or Python?

C might be a good choice if you want to learn a simple and efficient language and are interested in tasks requiring low-level access to hardware or system functions.

But if you want to learn a language that is more flexible and easy to use, and you are interested in tasks that require rapid development and high-level abstractions, Python might be a better choice.

4. Which language should I learn first?

It can be difficult to decide which programming language to learn first, as different languages have different strengths and use cases.

If you are just starting out, it might be helpful to start with a simple and easy language, such as Python or C. These languages are widely used and can provide a good foundation for learning more advanced concepts.

To learn more, check out our blog, which explains what programming language you should choose.

Yes, C is still widely used in 2022, it is a popular programming language that has been around for decades. It continues to be used in various applications, including operating systems, embedded systems, and games.

C is also a widely taught programming language in schools and universities to teach programming fundamentals.

6. How long does it take to learn C programming?

If you have some prior programming experience, you may be able to learn the basics of C relatively quickly, perhaps in a few weeks or a couple of months.

However, it can take longer to become proficient in C and to understand more advanced concepts.

If you are a complete beginner with no prior programming experience, it may take longer as you will need to learn the fundamentals of programming first. In this case, it might take you several months to learn C.

If you are curious, why not check out our blog, where we explain how long it takes to learn to code?